Too much work happening in the background and not posting news here. Now it's time to keep everyone aware of what's happening on DNT development.

First, I (farrer) decided that the better to to after all these years is that DNT should became a complete modable 3D RPG engine. To achieve that, now DNT has support for AngelScripts, which controls not only the usual map and missions, but also all RPG rules and GUI widgets. It's a huge step on the modable idea. 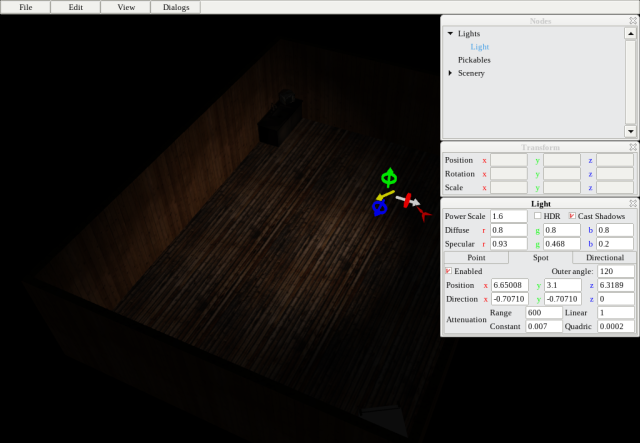 Also, DNT is using Ogre 2.1 branch, which means better performance and the possibility of a good looking games with all the amazing features available on it. 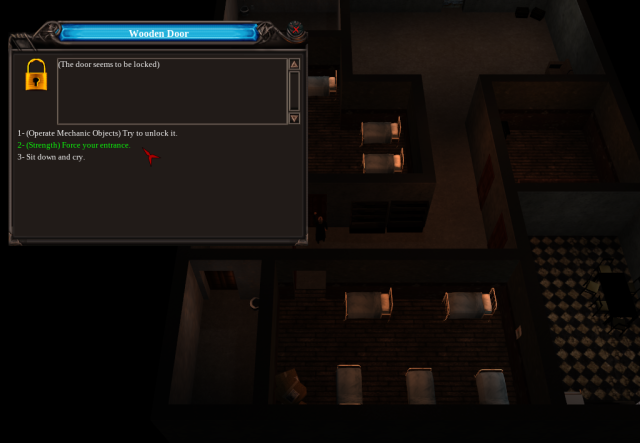 Although this DNT isn't ready for release yet, but is moving sooner to it (I hope).

Just to point that I'm now (in fact, from some time) rewriting DNT to use Ogre3D as its rendering engine, instead of the somewhat buggy and limited in-house old one.

On this process, I've split our GUI library code (Farso) to be a standalone library (instead of heavy interrelated to DNT original code as it was).

If anyone feels in the mood to test the heavy-in-work-and-yet-unfinished port of DNT to Ogre3d, just check here

Currently it can load and render indoor maps, have all its not-animated models converted do Ogre's .mesh, and somewhat like 50 per cent of the code rewritten/re-added.

The GUI library is fully rewritten (removing lots of really bad implementations), got skin support and is now capable to render on both plain OpenGL and Ogre3D (its somewhat stable code is available here.

With some more work, I believe that in the first months of 2017 we can have a release of this new DNT code base.

Some optimizations, a new mission and a few bugfixes later it's time for DNT 0.12!

After a long hyatus, DNT 0.11 is out, with SDL2 support, some code refactoring and two bug fixes.

Where the project should go? Not sure, probably with more code clean ups, an optimization to MD5 model rendering and with some polishing to the tools, it could be converted to moddable single player RPG game engine instead of the unfinished game it is now.

Thanks to the portraits created by Nubux and to the new graphics, sounds and tons of suggestions and feedback by Qubodup, DNT 0.10 is out!

The highlights for this version are:
- New portraits (thanks to nubux, qubodup and scribe);
- Lockable doors
- A new mission to be completed at game's end;
- Lots of new sounds;
- Implemented area affect talents;
- New menu and game-over musics;
- Lots of bugs fixed.

And a lot more: See the changelog here.

The return of the son of Git repository url changed!


You are probably asking: "What, again??", but seems that the terrible creature procriated, and its son ate all remaining places where lower case characters appears on our title (actually, even on where the title is fully in lower case!).

So, you'll need to either do a new repository clone, with the command:
git clone ssh://username@git.code.sf.net/p/dnt/code dnt-code


Or edit the .git/config file, changing the url to:


If you aren't a DNT developer, the clone command is
git clone git://git.code.sf.net/p/dnt/code dnt-code

Also, the creature's son changed our sourceforge project to http://sourceforge.net/projects/dnt , so change your bookmarks and hope that the creature don't strike on your own repositories!


Seriously, we asked SF to change the project to DNT. DccNiTghmare name is now only historical. Hope you also preffer it that way.

To everyone following DNT development, the git respository URL changed.

You'll need to either do a new repository clone, with the command:
git clone ssh://username@git.code.sf.net/p/dccnitghtmare/code dccnitghtmare-code

Or edit the .git/config file, changing the url to:


If you aren't a DNT developer, the clone command is
git clone git://git.code.sf.net/p/dccnitghtmare/code dccnitghtmare-code

The highlights for this version are:
- idtech4 .md5 models and animations support
- Fixed all known bugs on our A* pathfinding implementation (also added an optional graphical debugger for pathfinding)
- Some scripts to controll NPCs and animals idle behaviour;
- Support for skorpio tilesets (both in game and dntMapEditor - as seen in this video)

Have Fun and remember: DNT is always in need of more people to create it!

DNT 0.7 is out, with a new particle editor and an improved map editor (see the video bellow for an example of using the dntMapEditor).
It also have some improvements to the game GUI and some other things (see full changelog here).
Unfortunally, I couldn't implement all the things I wanted (time is a problem here!), and the editors are yet not so polished as I wanted it to be. New missions only on the next releases...